Well, things our best laid plans went quite awry. Between summer camp, our aggresive riding schedule, and the brutal fact that I did not get things ready at the house our project is stalled.

But, as another Scoutmaster I know often says, we are scouts and that won't stop us. We will reboot the project after school starts.

Here's what I envision. First, I have to see if the project canoes can be built in my basement. Well, more importantly, once they are built will we be able to get them out?! I have a canoe in the yard that a bit wider than our project and I have a beam that is a bit longer. This will permit me a chance to determine whether or not my idea is sound. If so, we will resume work on a "workshop" basis. This means we will schedule dates other than troop meetings for interested scouts to sign up. More about that soon.

Troop 25 is not the first troop to build a canoe of any kind but it will certainly be one of a small number of troops to do so. We will build at least two canoes and possibly more.

The troop will not own these but the boys can take ownership by reembursing Mr. Wilkerson for the cost of supplies. The approximate cost is $200. AMong the responsibilities of scouts working on this project is to track time, materials and expenses. This will be good "real world" experience for the scouts. 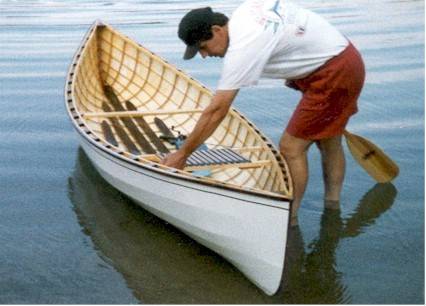 What if my son wants a boat of his own and we reach the end of summer before he can take ownership? We will continue to build and launch canoes for as long as scouts have an apetite for the work and a willingness to take ownership as each boat approaches completion. Of course when we resume our regular troop meetings and as the weather changes, we will suspend the project until the following spring and summer.

I envision a possibilty that this project could last for quite a while. Only time will tell. It is also possible that we may switch to another design or construction method as the scouts skills and interests change.

The designer of our boats describes them as "Geodesic Airolite Construction" It is really very simple and inexpensive. The process consists of building a simple rugged wood framework which is "braced" by weaving the wood with triangulated KEVLAR® roving. This results in a basket-like frame which we will then covered with Dacron. If you have seen sail cloth you will have an idea of it's texture. However, unlike sail cloth, this material is fitted by heat shinking it. It is a common airplane wing covering type of fabric such as might be seen on crop dusters.

Mr Platt, the designer, has this to say bout the approach, "Obviously Dacron covered boats are not bullet proof...they must be treated with some respect, but not pampered." They can take a beating from rocks and snags but can be cut easily with a sharp object like a broken bottle. Mr. Platt goes on to say, "This has proved to be no problem. Carry some Duct tape and DON'T WORRY!"

The construction technique will be fun and educational for any interested scout. We require only simple tools and the scouts will be VERY involved in the construction.

If you want to know more about these boats you can visit his site at gaboats.com.

You can monitor this column for our most recent status updates.